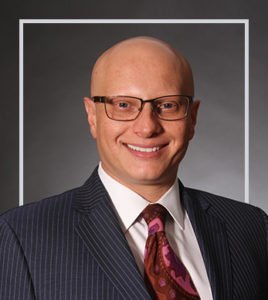 Farris Ain is one of the founding partners of Berberian Ain LLP. His practice focuses on personal injury and employment law cases. Mr. Ain has represented clients throughout California, and obtained countless successful outcomes through both settlements and state and federal trials. It is his mission to provide the highest quality legal services to the Southern California community.

Giving back to my community has always been a priority for Mr. Ain. In addition to providing pro bono legal services, he has raised funds for the Children’s Miracle Network, Christmas in April, Posadas, American Cancer Society, the Red Cross, the Colorful Flags Program, Concert Under the Stars of the Hafif Family Foundation, Pomona Heritage Society, and other notable charities. He is also a member of the American Bar Association, Los Angeles Bar Association, Consumer Attorneys of California, Consumer Attorneys Association of Los Angeles, and Association of Trial Lawyers of America.

Mr. Ain has had the great honor of being recognized for his achievements over his career as a trial attorney, including being acknowledged by his peers for five years running as a Super Lawyer. He has also published numerous articles around the law and had his courtroom victories recognized by various publications throughout the United States.

While Mr. Ain is proud of his achievements, what matters most to him is delivering the legal results that his clients need and deserve with the highest level of client service and satisfaction.