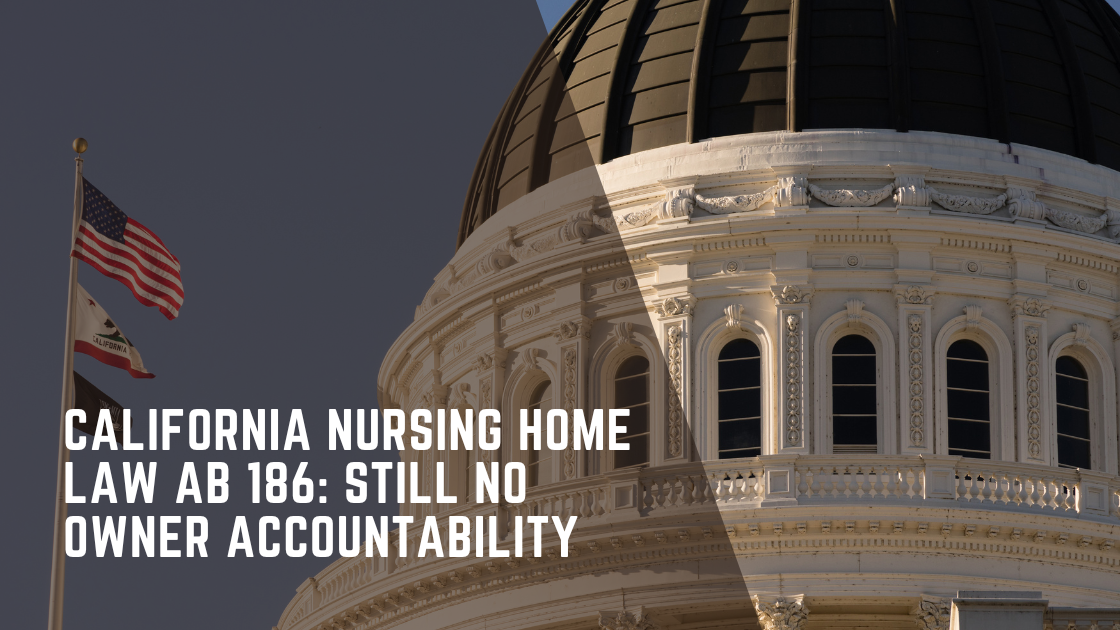 California’s nursing home laws have been a work in progress for many years. Despite legislators’ stated intentions, AB 186 and the state’s reimbursement system, AB 1629, have failed to keep owners accountable for their business practices. Instead, these laws give funds to nursing home administration, while residents receive substandard care due to understaffed facilities and undertrained nurses.

With the passage of AB 186 in June of 2022, state legislators have softened regulations regarding state funds for nursing homes by removing several conditions that tied state money to staff hiring and training.

Explore the implications of California AB 186 and how you can protect your loved one from elder abuse with legal representation from Berberian Ain LLP.

In California, elder abuse is defined as physical, emotional, or financial abuse of a person 65 years or older. The definition also applies to harm done to dependent adults by someone who is a caretaker or family member. Elder abuse can take many forms, including neglect, abandonment, financial exploitation, and sexual or emotional abuse.

Unfortunately, nursing homes are not immune to this problem. The World Health Organization notes that approximately 1 in 6 elder adults over 60 living in communal homes suffered some form of elder abuse during the past year, while 2 out of 3 staff members admit to having committed abuse in that same span.

There are several reasons why nursing homes may be particularly vulnerable to elder abuse. The most common factors include:

As a result of these factors, it is important for nursing home residents and their families to know the signs of elder abuse and how to report it.

AB 186 in California is legislation that concerns the state’s public health systems, including nursing homes and care facilities. One of the law’s stated purposes is to empower workers in the assisted care space.

However, there has been a significant backlash regarding allocating funds directly to nursing home companies. Rather than implementing regulations that ensure that doctors, nurses, and other staff receive the support they need, AB 186 hands special interests large sums of money without proper oversight.

According to opponents of the law, the reimbursement scheme fails to safeguard against the misuse of millions of dollars in funds. Instead, groups like the California Health Advocates say it guarantees elder care facilities’ profitability.

On July 7th, 2022, the California Department of Health Care Services reported a pool of $78 million in funds to be given to nursing home administrators over the year. These distributions include a $39 million disbursement in January and two $19.5 million disbursements in July and October.

These funds are acquired by increasing Medi-Cal rates, causing California taxpayers to foot the bill for nursing home administrator-controlled funds. According to some, AB 1629 gives care facility owners nearly open-ended use over millions in additional funds.

How Much Do Nursing Home Owners Make a Year?

Nursing home executives in the United States typically earn between $214,312 and $325,320. Depending on the form of a nursing home’s operation (for-profit vs. non-profit) and whether a facility is a stand-alone business or part of a larger organization, owners can bring home even higher earnings.

One of the most challenging decisions facing nursing home administrators is allocating resources between providing patient care and maximizing profits. Unfortunately, in many cases, the latter takes precedence over the former. This can lead to substandard care for residents and an overall decline in their quality of life.

Rather than allocating funds to nursing home administrators to distribute as they see fit, advocates for nursing home doctors, nurses, and residents support an action-oriented approach to improving operations. Instead of awarding bonuses to millionaire owners, these administrators should make detailed action plans on where to use the funds ushered in by AB 186 and 1629 to help patients.

Appropriate allocation of funds may include:

Protect Your Loved Ones From Predatory and Abusive Conduct

Taking action on behalf of your loved one is crucial if you see signs of nursing home abuse. An experienced personal injury attorney can investigate the allegations and gather evidence to support your claim.

A lawyer with Berberian Ain LLP can help you pursue a civil lawsuit against the responsible parties to help your loved one receive compensation to help them recover from the abuse.

Speaking with a knowledgeable elder abuse attorney can help you recover medical expenses and damages for pain and suffering, mental anguish, and other consequences of negligent conduct by assisted care facility staff.

Contact us to learn how much your case may be worth and how to seek restitution for your loved one.

For more information about elder abuse and legal ruling that affect nursing homes, view our law firm’s blog. Our firm is passionate about helping families and elderly nursing home residents in California get the best care possible and holding those who perpetuate abuse responsible for their actions.